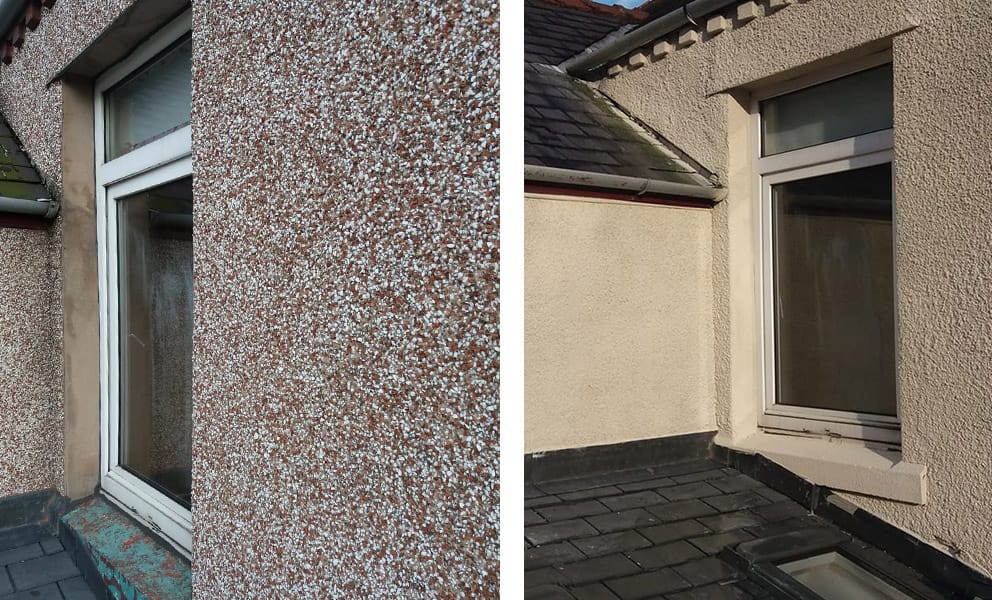 Pebbledash is a common feature on houses across the UK. Also known as roughcast, it has both functional and decorative qualities when covering your walls. However, over time, it can become worn, discoloured and even cracked – or you might simply think it looks dated.

In this post, we’ll discuss the options available to renovate your pebbledash-covered walls.

What’s the point of pebbledash?

Before deciding what to do with your pebbledash, it’s worth considering why it’s there in the first place. Made up of cement, sand, gravel, pebbles or shells – or flint chips in modern mixtures – pebbledash was primarily used to cover substandard brick work in the early 20th century.

That’s not to say all houses with pebbledash have poor brickwork. After it became iconic of British houses, however, many used pebbledash for its decorative quality. Nowadays, it’s simply down to preference. Some people like pebbledash, others think it looks dated – and this is important when deciding what to do with your walls…

Can I paint pebbledash?

If your pebbledash has become visibly weathered, but is otherwise in a good condition, painting may seem like a great option. It would provide a refreshed appearance without too much cost or effort – or so you would think.

Unfortunately, with such a rough, bumpy surface, pebbledash isn’t really suitable for painting. The various peaks, troughs and sharp edges are a nightmare to paint – and the results are rarely good. On top of that, paint is never a long-term solution outside your home.

Instead, CorkSol SprayCork can be used to give you a much nicer finish. The spray will completely coat your pebbledash, without the same hassle as a paint job. The results will be practically flawless, and the cork coating will also be much more weather-resistant than any paint.

If you don’t like the look of pebbledash on your walls, you’ll no doubt be looking into ways to remove it. The problem is that pebbledash removal is by no means an easy job. On top of that, because pebbledash was typically used to cover poor brickwork, what lies underneath might not be ideal.

With all that in mind, the easiest way to get a much cleaner and modern look is to cover the pebbledash. Using a sprayed cork coating on top of the pebbledash will provide a completely fresh appearance combined with the weather-resistant, hard-wearing qualities that pebbledash offers.

What if it’s coming away from the wall?

Another factor when it comes to pebbledash is its condition. While pebbledash is very hard-wearing, it can eventually become cracked and allow moisture in. Over time, that could lead to it coming away from the wall – in which case it will definitely need to be removed.

Because of the poor brickwork discussed above, you’ll still want some sort of covering on your wall. In this scenario, you could invest in new pebbledash. Alternatively, a direct coating of SprayCork can provide a quick, easy and long-lasting solution with a more modern finish.

A natural solution for pebbledash

Whether you’re removing, refreshing or rendering over your pebbledash, Corksol’s innovative SprayCork coating can provide a solution that’s hard-wearing and looks great. Drawing on the natural qualities of cork, our eco-friendly coating is super adhesive, weather resistant and remarkably insulative.

To find out more, don’t hesitate to get in touch with our team.